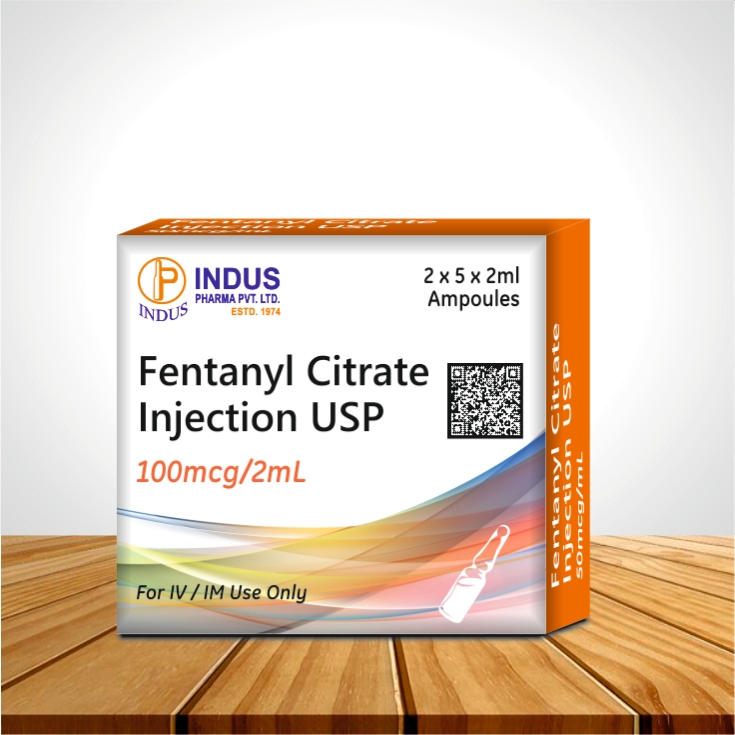 COMPOSITION
Each ml contains:
Fentanyl Citrate USP
Eq. to Fentanyl 50mcg
Water for Injection USP q.s.
CLINICAL PHARMACOLOGY
Pharmacodynamic properties
Pharmacotherapeutic group: Opioid analgesic
ATC code: N01AH01
Fentanyl is a well established chemical entity. It is an opioid analgesic with a high affinity for
the μ-opioid receptor.
Fentanyl can be used as an analgesic supplement to general anaesthesia or as the sole
anaesthetic. Fentanyl preserves cardiac stability, and obtunds stress-related hormonal changes at
higher doses. A dose of 100 micrograms (2.0 ml) is approximately equivalent in analgesic
activity to 10 mg of morphine. The onset of action is rapid. However, the maximum analgesic
and respiratory depressant effect may not be noted for several minutes. The usual duration of
action of the analgesic effect is approximately 30 minutes after a single IV dose of up to 100
micrograms. Depth of analgesia is dose-related and can be adjusted to the pain level of the
surgical procedure. Fentanyl has a broad safety margin. In rats, the ratio LD50/ED50 for the
lowest level of analgesia is 277, as compared with 69.5 and 4.6 for morphine and pethidine
respectively.
Like other opioid analgesics, fentanyl, depending upon the dose and speed of administration, can
cause muscle rigidity, as well as euphoria, miosis and bradycardia.
Histamine assays and skin-wheal testing in man, as well as in vivo testing in dogs, have
indicated that clinically significant histamine release is rare with fentanyl.
All actions of fentanyl are immediately and completely reversed by a specific opioid antagonist,
such as naloxone.