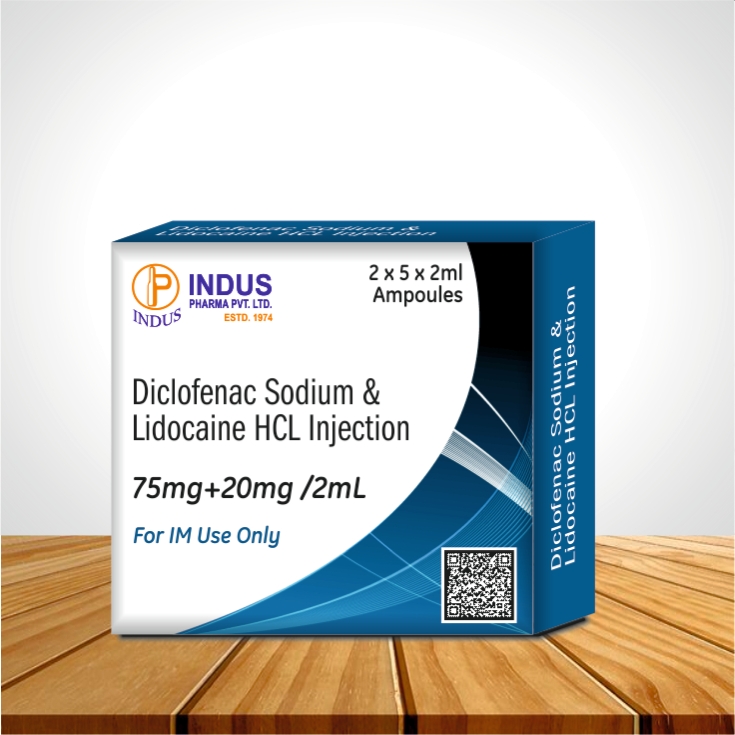 Diclofenac Sodium is a potent nonsteroidal anti-inflammatory drug (NSAID) with marked analgesic and antipyretic properties. It also has some uricosuric effects. The action of Diclofenac appeared to be associated with the inhibition of prostaglandin synthesis. Diclofenac may inhibit synthesis of prostaglandins by inhibiting cyclooxygenase, an enzyme that catalysis the formation of prostaglandin precursors from arachidonic acid. Peak plasma concentration is achieved within half an hour following injection. Lidocaine is the most widely used local anesthetic drug. It acts more rapidly and is more stable than most other local anesthetics. It is a very useful surface anesthetic. Like other local anesthetics, Lidocaine impairs the generation and conduction of nerve impulses by slowing depolarization. The onset of anesthesia of Lidocaine Hydrochloride is more rapid and the duration is 1-2 hours.

The injection contains Diclofenac Sodium that is used to relief all grades of pain and inflammation in a wide range of conditions including:

The injection also contains Lidocaine which acts as a local anesthetic. Therefore the possibility of pain at the injection site, which is most likely to occur after intramuscular injection, is minimized if the Lidocaine containing injection is used in the above indications.

It is contraindicated for those patients who are hypersensitive to Diclofenac. In patients with active or suspected peptic ulcer or gastrointestinal bleeding or for those patients in whom attacks of asthma, urticaria or acute rhinitis are precipitated by Aspirin or other NSAIDs possessing prostaglandin syntheses inhibiting activity Diclofenac is also contraindicated. Because of the presence of Lidocaine, this injection is also contraindicated for those patients who are hypersensitive to local aesthetics of the amide type, although the incidence is very rare. In patients with Adams-Stokes syndrome or with severe degrees of SA, AV, or intraventricular heart block in the absence of an artificial pacemaker.

Anticoagulants: There are isolated reports of an increased risk of haemorrhage with the combined use of Diclofenac and anticoagulant therapy, although clinical investigations do not appear to indicate any influence on anticoagulant effect.

Cyclosporine: Cases of nephrotoxicity have been reported in patients receiving Cyclosporine and Diclofenac concomitantly.

Methotrexate: Cases of serious toxicity have been reported when Methotrexate and NSAIDs are given within 24hours of each other.

Quinolone antimicrobials: Convulsions may occur due to an interaction between quinolones and NSAIDs. Therefore, caution should be exercised when considering concomitant therapy of NSAIDs and quinolones.

Other NSAIDs and steroids: Co-administration of Diclofenac with other systemic NSAIDs and steroids may increase the frequency of unwanted effects. With Aspirin, the plasma levels of each are lowered, although no clinical significance is known.

Diuretics: Various NSAIDs are liable to inhibit the activity of diuretics. Concomitant treatment with potassium-sparing diuretics may be associated with increased serum potassium levels. So, serum potassium should be monitored.

Renal: Patients with severe hepatic, cardiac or renal insufficiency or the elderly should be kept under close observation, since the use of NSAIDs may result in deterioration of renal function. The lowest effective dose should be used and renal function should be monitored. Hepatic: If abnormal liver function tests persist or worsen, clinical signs or symptoms consistent with liver disease develop or if other manifestations occur (eosinophilia, rash), Diclofenac should be discontinued. All patients who are receiving long term treatment with NSAIDs should be monitored as a precautionary measure (e.g., renal, hepatic function and blood counts).

Side effects to Diclofenac Sodium and Lidocaine injection are usually mild and transient. However if serious side effects occur the injection should be discontinued. Gastrointestinal discomfort, nausea, diarrhea and occasionally bleeding may occur. In very rare instances, injection site disorder may occur. In isolated cases, abscesses and local necrosis may occur. The adverse effects due to Lidocaine mainly involve the CNS, are usually of short duration, and are dose related. The CNS reactions may be manifested by drowsiness, dizziness, disorientation, confusion, light headedness etc.

EFFECTS ON ABILITY TO DRIVE AND USE MACHINES

Adult: One ampoule once (or in severe cases, twice) daily by intramuscular injection.

Renal colic: One ampoule once daily intramuscularly. A second dose may be administered after 30 minutes if necessary.

Elderly patients: In elderly or debilitated patients, the lowest effective dosage is recommended, commensurate with age and physical status, or as prescribed by the physician.

It should not be prescribed during pregnancy unless there are compelling reasons for doing so. The lowest effective dosage should be used. These types of drugs are not recommended during the last trimester of pregnancy. Very small quantities of Diclofenac may be detected in breast milk, but no undesirable effects on the infant are to be expected.

Store below 30° C, protected from light.

5 Ampoules of 2ml are kept in a tray.

The tray containing 5 Ampoules and such 2 tray is kept in a unit carton along with a package insert.

A WHO GMP Certified Company