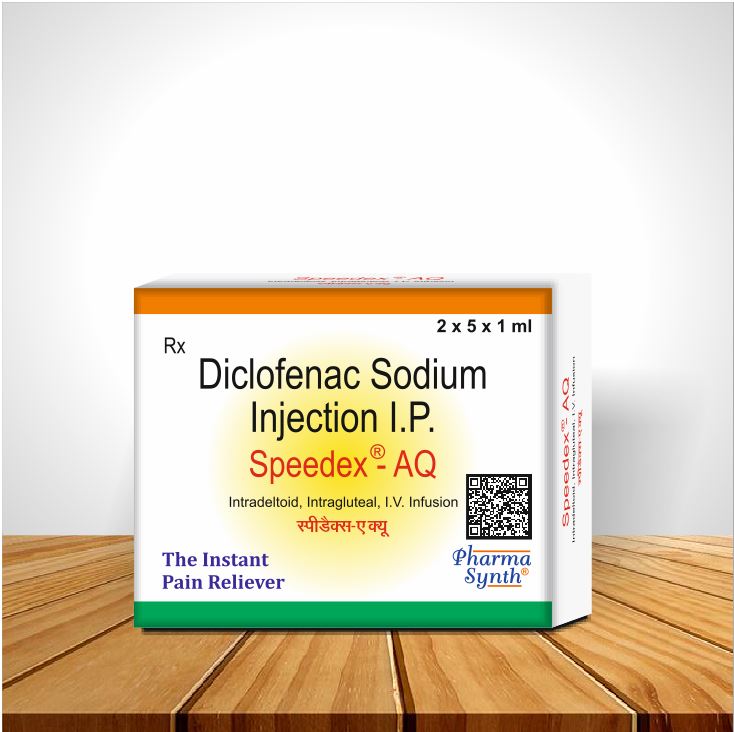 Mechanism of action
Diclotop is a nonsteroidal agent with marked analgesic/anti- inflammatory properties. It is an inhibitor of prostaglandin synthetase, (cyclo-oxygenase). Diclofenac sodium in vitro does not suppress proteoglycan biosynthesis in cartilage at concentrations equivalent to the concentrations reached in human beings. When used concomitantly with opioids for the management of post-operative pain, Diclotop often reduces the need for opioids.
Pharmacokinetic properties
Absorption
After administration of 75mg diclofenac by intramuscular injection, absorption sets in immediately, and mean peak plasma concentrations of about 2.558 ± 0.968µg/ml (2.5µg/mL ≡ 8µmol/L) are reached after about 20 minutes. The amount absorbed is in linear proportion to the size of the dose.
Intravenous infusion: When 75mg diclofenac is administered as an intravenous infusion over 2 hours, mean peak plasma concentrations are about 1.875 ± 0.436µg/ml (1.9µg/mL ≡ 5.9µmol/L). Shorter infusions result in higher peak plasma concentrations, while longer infusions give plateau concentrations proportional to the infusion rate after 3 to 4 hours. This is in contrast to the rapid decline in plasma concentrations seen after peak levels have been achieved with oral, rectal or i.m. administration.
Bioavailability
The area under the concentration curve (AUC) after intramuscular or intravenous administration is about twice as large as it is following oral or rectal administration as this route avoids “first-pass” metabolism.
Distribution
The active substance is 99.7% protein bound, mainly to albumin (99.4%).
Diclofenac enters the synovial fluid, where maximum concentrations are measured 2-4 hours after the peak plasma values have been attained. The apparent half-life for elimination from the synovial fluid is 3-6 hours. Two hours after reaching the peak plasma values, concentrations of the active substance are already higher in the synovial fluid than they are in the plasma and remain higher for up to 12 hours.
Metabolism
Biotransformation of diclofenac takes place partly by glucuronidation of the intact molecule, but mainly by single and multiple hydroxylation and methoxylation, resulting in several phenolic metabolites, most of which are converted to glucuronide conjugates. Two phenolic metabolites are biologically active, but to a much lesser extent than diclofenac.
Elimination
Total systemic clearance of diclofenac in plasma is 263 ± 56 mL/min (mean value ± SD). The terminal half-life in plasma is 1-2 hours. Four of the metabolites, including the two active ones, also have short plasma half-lives of 1-3 hours.
About 60% of the administered dose is excreted in the urine in the form of the glucuronide conjugate of the intact molecule and as metabolites, most of which are also converted to glucuronide conjugates. Less than 1% is excreted as unchanged substance. The rest of the dose is eliminated as metabolites through the bile in the faeces.

INDICATION AND USAGE
By intramuscular and subcutaneous injection: Diclotop Injection is effective in acute forms of pain, including renal colic, exacerbations of osteo- and rheumatoid arthritis, acute back pain, acute gout, acute trauma and fractures, and post-operative pain.
By intravenous bolus injection: for treatment or prevention of post-operative pain in the hospital settings.
Diclotop is indicated in adults. Use in children and adolescents is not recommended.

CONTRA-INDICATION
Known hypersensitivity to the active substance or to any of the excipients.
 History of asthma, urticaria, or allergic-type reactions after taking aspirin or other NSAIDs.
 Perioperative pain in the setting of coronary artery bypass graft (CABG) surgery.
 Moderate to severe renal insufficiency in the perioperative period and who are at risk for volume depletion.

DRUG INTERACTIONS
Concomitant use of diclofenac and aspirin is not generally recommended because of the potential of increased adverse effects including increased GI bleeding.
 Concomitant use of Diclotop and anticoagulants has a risk of serious GI bleeding higher than users of either drug alone.
 ACE inhibitors: NSAIDs may diminish the antihypertensive effect of ACE inhibitors.

OVERDOSE
Symptoms: There is no typical clinical picture resulting from diclofenac over dosage. Over dosage can cause symptoms such as headache, nausea, vomiting, epigastric pain, gastrointestinal bleeding, diarrhoea, dizziness, disorientation, excitation, coma, drowsiness, tinnitus, fainting or convulsions. In the case of significant poisoning acute renal failure and liver damage are possible.
Therapeutic measures: Management of acute poisoning with NSAIDs, including diclofenac, essentially consists of supportive measures and symptomatic treatment. Supportive measures and symptomatic treatment should be given for complications such as hypotension, renal failure, convulsions, gastrointestinal disorder, and respiratory depression.
Special measures such as forced diuresis, dialysis or haemo-perfusion are probably of no help in eliminating NSAIDs, including diclofenac, due to the high protein binding and extensive metabolism.

PREGNANCY AND LACTATION
Pregnancy
Starting at 30 weeks gestation, Diclotop and other NSAIDs, should be avoided by pregnant women as premature closure of the ductus arteriosus in the fetus may occur. If this drug is used during this time period in pregnancy, the patient should be apprised of the potential hazard to a fetus.
Lactation:Like other NSAIDs, diclofenac passes into breast milk in small amounts. Therefore, diclofenac should not be administered during breast feeding in order to avoid undesirable effects in the infant
Female fertility: As with other NSAIDs, the use of diclofenac may impair female fertility and is not recommended in women attempting to conceive. In women who may have difficulties conceiving or who are undergoing investigation of infertility, withdrawal of diclofenac should be considered.

STORAGE CONDITION
Store below 30°C, Protected from light, Do not freeze.