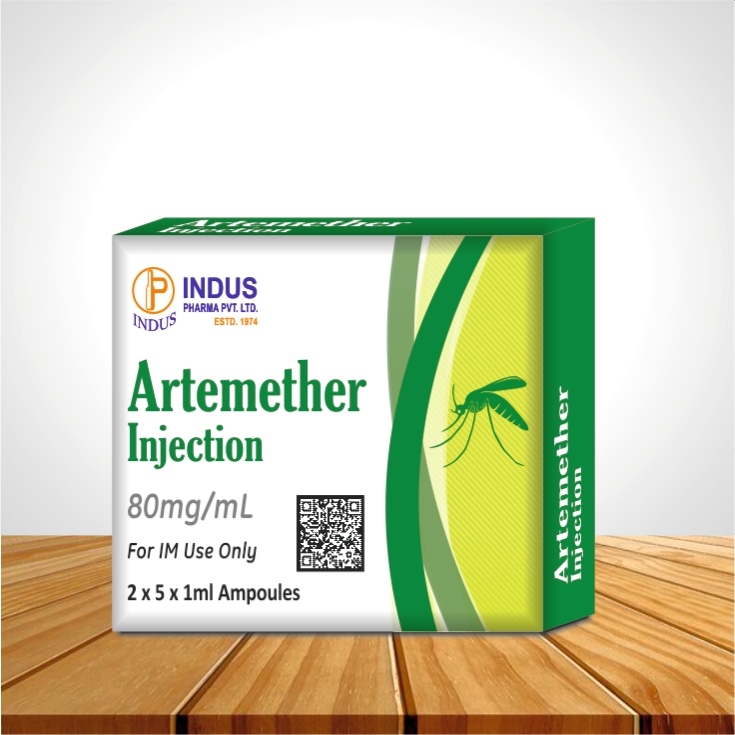 Artemether is a antimalarial medicines. Artemisinin and its semisynthetic derivatives act essentially as blood schizonticides. The presence of the endoperoxidebridge appears to be essential for antimalarial activity: generation of singlet oxygen and formation of free radicals. Inhibition of protein synthesis as the basic mechanism of action is suggested in studies which showed morphological changes in ribosomes as well as in the endoplasmic reticulum. Morphological changes of the parasitic membranes induced by dihydroartemisinin have been described, being the result of free radical action. The observation that membranous structures are disrupted have lead, once again, to the hypothesis that the site of action of artemisinin could be the membranous structures. Other in vitro tests suggest that artemisinin causes a marked diminution of nucleic acid synthesis.

It is metabolized in the liver to the demethylated derivative dihydroartemisinin.

The elimination is rapid, with a TI/2 of 4 hours.

Dihydroartemisinin has a Tl/2 of more than 10 hours.

Measurement can be done by high-performance liquid chromatography with UV detection and electrochemical detection. These drugs bind avidly and irreversibly to membranes, including those of normal erythrocytes and may also bind covalently to plasma proteins. In view of these difficulties, some groups have developed bio-assays as useful, if imprecise, measures of biological activity.

Artemisinin and its derivatives are metabolised rapidly in vivo to dihydroartemisinin. This active metabolise may be eliminated more slowly than the parent compound. Intramuscular B-Artemether is rapidly absorbed reaching Cmax within 4 – 9 hours. Oral, B-Artemether is rapidly absorbed reaching Cmax within 2 – 3 hours. The elimination is rapid, with a Tl/2 of 4 hours. Pharmacokinetics of oral ß-Artemether in healthy males and patients with acute, uncomplicated, falciparum malaria. The pharmacokinetics of a single oral dose of ß-Artemether 200 mg were investigated in 6 healthy male volunteers. The pharmacokinetics of multiple doses of oral ß-Artemether 200 mg as an initial dose followed by 100 mg at 12h later, then 100 mg daily for 4 days were investigated in 8 male patients with acute uncomplicated falciparum malaria. In the healthy volunteers, median maximum plasma concentrations of ß-Artemetherof 118 ng/ml were reached at 3h. ß-Artemether undergoes rapid and extensive conversion to dihydroartemisinin. The active metabolise, dihydroartemisinin, reached Cmax at the median time of 6h, attaining higher plasma concentrations than the parent drug. In the patients B-Artemether was rapidly absorbed; median absorption half-life was 0.29h Cmax of 199 ng/ml was reached at 2.3h after the first dose. Steady state was reached after the third dose (24h). The plasma levels indicate high bioavailability.

The major metabolise of B-Artemether is the demethylated product dihydroartemisinin.

The following are considered to be metabolises.

Treatment of severe and complicated malaria caused by P.falciparum both in adults and children

in areas where there is multidrug resistance.

Treatment of uncomplicated malaria in situations where there is widespread prevalence of multidrug resistant P. falciparum infection.

Hypersensitivity to artemether or other artemisinin compounds.

Artemether is not recommended in the first trimester of pregnancy because of limited data.

No known drug interaction has been recorded of Artemether.

The ampoules should be stored at room temperature in their original containers and protected from light. Under these conditions the injectable forms have a shelf life of 3 years.

Artemether has been remarkably well-tolerated, and appears less toxic than quinine or Chloroquine; adverse effects include bradycardia, electrocardiogram abnormalities, gastrointestinal disturbances (nausea, abdominal pain, diarrhoea – oral therapy only), dizziness, injection site pain, skin reactions, and fever. Transient decreases in neutrophils and reticulocytes have been reported in some patients treated with artemether. Drug induced fever has been observed with artemether. Mild reactions were seen in patients to whom artemether had been administered intramuscularly. These included nausea, hypotension, dizziness and tinnitus. These side effects were also reported: dark urine, sweating, somnolence, and jaundice. There were no deaths or any other side effects. No irreversible side effects were seen. Slight rise of SGOT and SGPT may occur in individual cases. Neurological side effects have not yet been observed in clinical use but clinical trials suggest that coma may be prolonged in patients treated with artemether and there was an increased incidence of convulsions in one trial in cerebral malaria. Transient first degree heart block has been documented in three patients receiving Artemether.

Neurotoxicity has been observed in animal studies but not in humans.

Cardiotoxicity has been observed following administration of high doses of Artemether.

EFFECTS ON ABILITY TO DRIVE AND USE MACHINES

There is no experience with overdosage with Artemether. There is no specific antidote known for the Artemisinin derivatives. However, experimental toxicological results obtained with large doses of Artemisinin on the cardiovascular system and the CNS should be considered. Overdosage could bring on cardiac irregularities. An ECG should be taken before initiating treatment in cardiac patients.

Following 4 days: 80 mg administered by IM route once a day.

The dose should not be exceed 480 mg in adults.

Children: First day: 1.6 mg/kg of body weight administered by IM route twice a day at a 12

Following 4 days: 1.6 mg/Kg of body weight administered by IM route once a day.

The dose should not be exceed 9.6 mg/ kg in children.

As per information available from World Health Organisation, little experience has been gained with the use of this drug in pregnancy but it should not be withheld if it is considered life-saving to the mother.

5 Ampoules of 1ml are kept in a tray.

A WHO GMP Certified Company